You are here:
October 26, 2018UncategorizedBy

Susanna Reid has spoken out about her decade-long battle with tinnitus after a ‘bad day’ of suffering with the debilitating hearing condition.

The Good Morning Britain co-anchor, 47, took to Twitter on Monday to tell her followers the constant ringing in her ears which characterises the affliction was ‘so loud’.

The broadcaster, who was diagnosed with tinnitus over a decade ago after the birth of her second son Finn, now 13, took to the social media platform on Tuesday to reassure fans that she was feeling much better after a tough 24 hours. 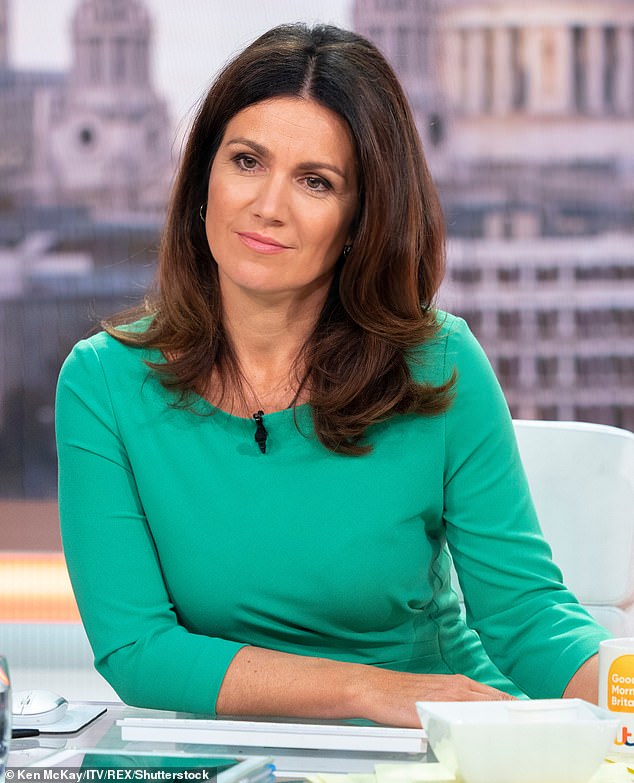 Tough: Susanna Reid has spoken out about her decade-long battle with tinnitus after a ‘bad day’ of suffering with the debilitating hearing condition (pictured last month)

In a tweet following her appearance on Good Morning Britain on Monday, Susanna described hearing a ‘loud’ sound similar to a high-pitched continuous beeping.

The mother-of-three wrote: ‘My tinnitus is so loud right now. The noise you used to hear when TV programming finished at the end of the day? That. In my head.’

After receiving messages of support, the newsreader added on Tuesday: ‘Thank you lovely people. Yesterday was a bad tinnitus day, but I can deal with it mostly.

‘If anyone out there needs support please contact @BritishTinnitus who have lots of good advice.’

Those who have tinnitus have the perception of noises in their ears or in their head, which can range from buzzing, whistling or hissing. There is currently no cure.

The British Tinnitus Association states: ‘It is not a disease or illness; it is a symptom generated within the auditory system and usually caused by an underlying condition.

‘The noise may be in one or both ears, or it may feel like it is in the head. It is difficult to pinpoint its exact location.

‘It may be low, medium or high pitched and can be heard as a single noise or as multiple components.’

Susanna has been battling tinnitus for over 10 years, which she previously said ‘probably resulted from a difficult labour’ when she had her second son, Finn.

She said on GMB in 2015: ‘When I first started hearing it, which was probably about ten years ago, I became quite distressed that I would never hear silence again.’

In 2013, Susanna was asked previously in an interview about ‘The treasured item you lost and wish you could have again’, to which she replied: ‘Silence. I’ve had tinnitus since Finn’s birth, which probably resulted from a difficult labour.’

The journalist raises son Finn, as well as Sam, 15, and Jack, 12, with her former partner of 16 years, Dominic Cotton.

Other celebrities have spoken about living with tinnitus, such as The Voice UK coach and Black Eyed Peas star Will.i.am.

He said: ‘There’s always a beep there every day, all day. I can’t be quiet as that’s when I notice the ringing in my ears.’

‘I’ve suffered from tinnitus all my life and constantly have a screaming noise in my ears,’ he said in April this year.

‘I’d love to experience peace and quiet, or listen to the birds singing, but I only have 46 per cent hearing.’

by Sarah Deen for MailOnline 23 October 2018

For a Tinnitus Assessment, please call our head office for an appointment 01244 311142

About the author
Related posts

5 Features to help you choose a Hearing Aid that best suits your needs and lifestyle!
December 12, 2019
Other Pages
Recent Posts
Contact Us
01244 311142 info@hearpure.com

Introducing our online store where you can have access to all our products related to ear care, cleaning products, can find all sorts of items to help with the care of your hearing aids. We have other essentials too like batteries and wireless, television and phone accessories. All the prices are inclusive of taxes! Dismiss